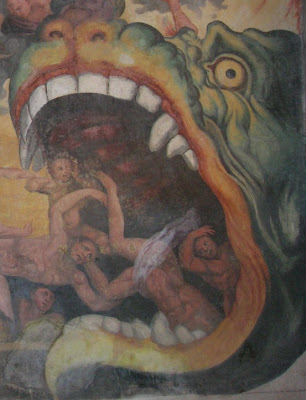 Detail of Leviathan, from Giacomo
Rossignolo’s fresco, “The Last Judgment.”
Mark Mitchell writes this about the European economic crisis:


Ultimately, the issue turns on matters of scale. Through this lens, the current crisis (and this is merely part of a broader crisis that extends beyond Europe) appears as a failure to appreciate the fact that optimal human institutions—those that facilitate human flourishing—cannot exceed a certain scale, and when they do, they will inevitably suffer.

Europe’s problems, then, present an opportunity to reconsider ideas that have been ignored for too long. A renewed commitment to the principles of political decentralism, economic localism, and cultural regionalism is a radical prescription for a Europe haunted by the specter of unity, but it would provide the opportunity for Europeans to reconsider the meaning of citizenship, culture, and community on a scale that is meaningful, which is to say, suited to human beings.

Couldn’t he just as easily be talking about America’s approach to education? Anyone who’s had any interaction with their local school system knows how un-local it actually is: there’s always someone higher up to blame for whatever is being done. The federal government has effectively dictated a uniform philosophy of education – one that sees its only goal as raising standardized test scores – and the states have filled in the blanks by dictating what local school systems can and cannot do. Even within a school district, it’s never clear exactly where the buck stops – The principal? The superintendent? The school board? In the face of such a huge, increasingly centralized bureaucracy, the natural response is resignation and learned helplessness.

Isn’t that more human scale a part of what you get for your tuition dollars at a private school? Why deny it to public school students?

The concentration of policymaking power in the hands of federal officials (and to a lesser extent state officials) seems to reflect nothing but a prevailing sense that ordinary people cannot be trusted to make good decisions and need to be told what to do, for their own good. This attitude infects the entire educational system – from the way the federal government treats the states, to the way the states treat the local school boards, administrators, and teachers, and most of all to the way everyone treats the kids. It equates power with superior judgment. Why give people autonomy when you know better than they do?
.
Posted by Chris at 11:31 PM

As I was writing this post, a reader emailed me about another post comparing the European financial crisis to aspects of our educational system, and to a post reflecting on the false choice between national standards and chaos. Both are worth reading!

I followed the links to the blog by Jay Greene and then, out of curiosity, read his c.v. I had no idea there was such a thing as a "Department of Education Reform" (Greene holds an endowed chair in this department--at the U of Arkansas). From there I landed on Amazon reading reader reviews of a book Greene wrote called "Education Myths." Here below is a sample of one of the many negative reviews. Having not read the book, I have no idea how accurate this review is, but it seemed worth putting up here given other views you have expressed on this blog, Chris:


"What Special-Interests Group Want You to Believe About Our Schools" (without the last five words) is a much more accurate [sub]title. Mr. Greene works for The Manhattan Institute, a conservative special-interest group who would love to see unions abolished, more obedient (and less thoughtful) high school graduates, and the tentacles of the "free market" reaching into schools and young people's everyday lives. The author himself admits that standardized testing is imperfect (a far-too-mild indictment), then goes on to use test scores as evidence throughout the book.

There are surely problems with public education--any sane person would admit this. But this book makes claims that are based on some very troubling assumptions, including the idea that a business model is always the best model, students are inherently lazy and stupid, and that rewards and punishments are desirable (which has been repeatedly disproven countless times over the past fifty years... e.g. Alfie Kohn). If you agree with these dubious beliefs and want fodder to help justify larger classes, underfunding, and militant education, then you probably already agree with everything Greene says. If you want to actual improve public schooling for all students, read a book written by an educator (e.g. Deborah Meier, Jonathan Kozol, Ned Noddings, Howard Gardner, etc.).

Thanks, Doris. I knew from glancing at some of his other posts that I wouldn't agree with him on a lot of things, but I didn't explore too fully. But I do still agree with his basic point in the first post I linked to in the comment above.

I also find the idea of school choice appealing -- though I have zero faith in the concrete reality of what school choice has come to mean.

As you know from reading this blog, I'm a big fan of the Alfie Kohns and Deborah Meiers of this world. I'd love to hear their thoughts on the costs and benefits of having educational policy decided at relatively more centralized levels.

By the way, here is a link to those reviews of Greene's book that Doris mentioned.

Ah, the myth of parental (or local) incompetence. This one drives me crazy. Parents make educational decisions for children all the time. We make choices about sitters, daycare providers, preschools, camps, sports coaches and programs, music teachers, and religious instruction. We can make some choices about K-12 education through open enrollment, where we choose to live, and in choosing private schools or homeschooling. I don’t see anything particularly esoteric about issues in K-12 public education that would render parents incompetent to participate in decision-making about our local public schools.

For what it’s worth, I will never again describe myself as “just a parent” or apologize for having opinions about K-12 education without holding an education credential.

Chris--I just wanted to add that I like the phrase "human scale." Thanks for blogging the Mark Mitchell piece.

By the way, Joanne Jacobs linked to a new article called The Cult of Success by Diana Senechal. The blurb quoted is "In research studies, newspaper articles, and general education discussions, there is far more talk of achievement than of the actual stuff that gets achieved." Thought it might be of interest.

The Joanne Jacobs post is at http://www.joannejacobs.com/2011/12/the-cult-of-success/ and the PDF is available at http://www.aft.org/pdfs/americaneducator/winter1112/Senechal.pdf

Karen -- Thanks for the comments. That Diana Senechal article is very thought-provoking and certainly rings a lot of bells -- thanks for pointing it out.

As for "just a parent": as you can imagine, I certainly agree.