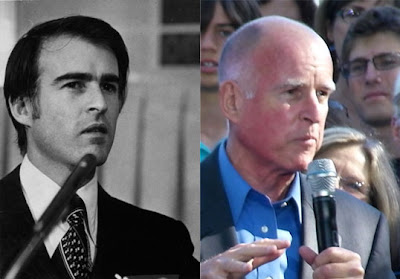 I confess that I’m nerdy enough (and old enough) that one of my childhood idols was the once and future California governor, Jerry Brown. His girlfriend was Linda Ronstadt; he flirted with Eastern philosophy; he lived in an unfurnished apartment instead of the governor’s mansion, and dined on the floor; he was the Un-Candidate for President.

As youthful enthusiasms go, that one embarrasses me far less than most. (Ditto for Linda Ronstadt, come to think of it.) I even ended up voting for Brown years later, in the 1992 Connecticut Democratic presidential primary, which, surprisingly, he won. And now he’s governor again, and it turns out he’s the voice of reason on educational “reform”:

Besides taking on testing, Brown called for getting the federal and state government out of the details of schooling.

“What most needs to be avoided is concentrating more and more decision-making at the federal or state level,” Brown said. “We should set broad goals and have a good accountability system, leaving the real work to those closest to the students.... We should not impose excessive or detailed mandates.” . . .

The tests take “too damn long,” Brown told the [L.A. Times]. “Second-graders take five days of tests. That’s longer than I spent on the bar exam. I think that’s absurd. You’ve gotta have some room for creativity.”

He was similarly insistent about limiting the role of Washington.

“The federal government should butt out,” Brown said [last year]. “You have more and more people who aren’t teaching, who are managing the flow of the money and all the various rules and mandates.

“They have this idea that schools are like businesses and if you set the right metrics, can you reward and punish and you get the outcome,” Brown said. “I don't feel things quite work that way.”

Maybe this will earn Brown a new generation of young fans?

I often think about these same issues in terms of comparisons with the college students I teach. Most of our undergrad classes last either 50 or 75 minutes, and then students generally have at least 15 minutes between every class. Granted, typically they will be commuting from place to place, but at least they can get outside if they choose, maybe breathe some fresh air, daydream, chat with friends.

Meanwhile, my spouse has a nephew who recently left a large public high school in a large southeast city for a small "military" school in a nearby state. (It's not actually affiliated with any branch of the U.S. military--just one of those traditional southern military academies.) His father told me that he found it ironic that the military school offered a far more relaxed environment than the public school. So, whereas the wayward sons of the Southern upper crust used to be shipped off to military school, I guess the new threat from those parents will be "shape up, or we're sending you to public school."

When I was living in Switzerland in the early 1990s, I participated in the American Democrats Abroad caucuses. There was a pretty set network of people who showed up for the caucus (American Democrats Abroad in Europe actually got something like twelve delegates so the "country" caucuses lead to the European caucus in Belgium, at which time those twelve delegates were picked). Needless to say, a financially-strapped, just-graduated student from Iowa was not in the cards...most of the folks involved in the caucus had money and were in Switzerland for financial reasons.

There was this young governor, Bill Clinton, who was the obvious favorite of the expats who showed up that night in Geneva. I assumed that he supported something in their interest--tax laws? trade agreements? Despite the VERY HARD push, I held my ground and went to Belgium to represent the small group (of maybe three of us) who supported...

The rest is history--the election, the Fleetwood Mac song, the dress. But for a fleeting moment in the early 1990s, I, too, carried a vote for Governor Brown.

Doris -- "Shape up, or we're sending you to public school" -- great motto for a military school!

Incredible how different college is from high school, isn't it? So much of what the schools now do to younger kids is justified on the grounds that they have to be prepared for the "expectations" in the next grade up, or for junior high, or for high school. Yet that logic never gets applied to what will be expected of them when they turn eighteen. Why is so little effort spent on getting them used to the freedom, autonomy, and right to participate in democratic self-government that they will have as adults? I wonder how many high-schoolers forgo higher education because they think it will just be more of the same.

Christy-- Thanks for commenting! I was working as a very junior associate in a big law firm at the time. I remember feeling pretty anti-establishment that morning when I voted for Jerry "Take Back America" Brown, only to go to work and find that most of the firm's partners -- the "one-percent" of my little world -- had voted for him, too.