School budget cuts will be (mostly) your legislators’ fault

It looks increasingly like we’re in for more school budget cuts. The Governor has proposed a paltry 1.25% increase in supplemental aid (formerly known as “allowable growth”) for next year. According to our superintendent, that’s well below what it will take to avoid another round of cuts like last year’s. If last year was any indication, the district will probably consider eliminating fifth grade orchestra and band and cutting foreign languages from junior high entirely, and that would only be the beginning.

The Johnson County legislators who are complaining about the paltry supplemental aid increase all voted for the teacher leadership program. Did they not realize that it would come at the expense of other educational needs, like music, foreign languages, and smaller class sizes?

With higher supplemental aid, our school board could always have chosen to fund a teacher leadership program by cutting music and foreign languages, if they really thought it was worth it. Instead, our state legislators made that decision for us, without any consideration of the cuts it would cause.

Can’t you just feel your schools getting better?

And if the state Department of Education has its way, the legislature will divert even more funds next year to pay for the expensive new standardized tests that the public is clamoring for. What will be left to cut?

So I have some sympathy for our school board members, who will have to decide where to make the cuts. But I do hope they look closely at how the district is spending its money, and not just at the usual targets. One thing they could do is to take a close look at how much the district is spending on standardized tests, above and beyond those that are required by the state. Here is a chart showing all the standardized tests that our district uses (click to enlarge): 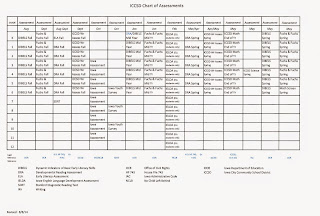 That’s a lot of testing—and so, I assume, a lot of money. Some of it may be required because of strings attached to various revenue sources. Maybe some of it is even so beneficial that it’s worth cutting music, languages, and staff for. Is anyone asking?
.
Posted by Chris at 10:38 PM

ya'all better pick up the phones and pens quick here for every K-12 public school child in this state:

"From the IOWA ASSOCIATION OF SCHOOL BOARDS…
Iowa House SSA Proposal
Today (Jan 20), the Iowa House unveiled their recommendations for FY 2016 and FY 2017 Supplemental State Aid (SSA). HSB 57 and HSB 58 recommend a 1.25% SSA rate for FY 2016 for the regular and categorical programs. The House released their FY 2017 recommendations (HSB 55, HSB 56) for a 2.45% growth rate. Both rates are consistent with Governor Branstad's recommendation.

These recommendations fall far short of the financial commitment that Iowa’s public schools and students need to move forward. IASB, in partnership with the Public Education Coalition, is recommending a 6% SSA rate. Iowa is 35th in the nation in per pupil spending. The proposals are likely to expand that gap.

Assuming an average increase in district costs of 3%, IASB calculates that more than 80% or 270 school districts would not receive enough funding at a 1.25% growth rate to cover these costs. The House's proposal would also disproportionately hit property taxpayers by generating an additional $16.3. million in property taxes. Nearly half of Iowa’s school districts would be on the budget guarantee based on this proposal.

Your action is needed now! The House Education Committee intends to move these bills this week. Tomorrow may be too late to influence your legislator's vote on SSA. Contact him or her now! The time to advocate is now! Make your point with legislators that a 1.25% growth rate is insufficient to ensure that Iowa schools can deliver a high-quality education to its students. Please contact the House members representing your school district AS SOON AS POSSIBLE: Ask them to oppose HSB 55, 56, 57, and 58.