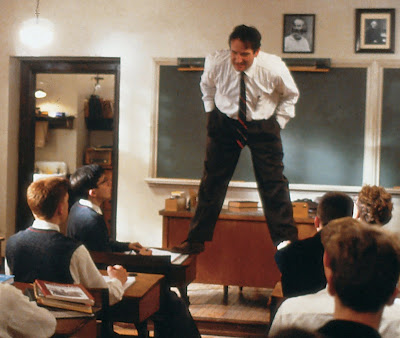 Robin Williams in Dead Poets Society
Everyone has a story about the cool teacher: the refreshingly unconventional one, the memorably irreverent one, the one who broke the rules, the iconoclast.

It recently occurred to me that, way more often than not, the teacher in those stories is male. I don’t think I’m imagining that, though you might convince me otherwise. Two counterexamples that come to mind are both from literature: Muriel Spark’s The Prime of Miss Jean Brodie and Charles Baxter’s short story “Gryphon.” But the portrayal of the female teachers in those works is considerably darker than that of the typical “cool teacher”; in the former she’s revealed to be a fascist, and in the latter she’s insane.

Hypothesis: women do not have the same societal permission to be unconventional and irreverent in the workplace, and have to worry much more about being called unprofessional. I’ve heard women in academia, for example, say that they have to worry more about projecting an air of authority in the classroom, or about being “tough” enough that they don’t lose the students’ respect. I think it is much easier, for example, for a male professor to allow students to call him by his first name than it is for a female professor.

Is there truth to that hypothesis? If so, what effect does it have on K-12 schools, which are staffed predominantly by women?
.
Posted by Chris at 6:00 AM

Email ThisBlogThis!Share to TwitterShare to FacebookShare to Pinterest
Labels: Gender

At the college/university level, I tend to think that women profs can hit a quirky stride once we get past middle age. My own goal is to morph into a UI-based version of Betty White. Doesn't our marching band have a Golden Girl anyway? Maybe they could use a real one. I was, after all, a high school majorette back in the day.

I had a teacher last year (female) who actually had us read a piece of our own poetry standing on top of our desk in front of the class for the same purpose as Mr. Keating.

I don't necessarily think that my female teachers have been collectively more submissive or willing to connect/engage students in a casual, unconventional way. I have had some very rebellious, if you will, teachers over the years, both male and female. Of course, there are many who have fit your hypothesis perfectly, but others that have been even more "memorably irrelevant" than their male colleagues. A lot depends on the work environment and norms of the school.

Doris -- Now that gives me something to look forward to!

Betty White standing on those desks would certainly give that scene a different feel.

Nicholas J -- I'm glad to hear that your experience doesn't confirm the thesis, and for that matter that those teachers (of either gender) still exist.