“When test scores go up, we should worry, because of how poor a measure they are of what matters, and what you typically sacrifice in a desperate effort to raise scores.”

Email ThisBlogThis!Share to TwitterShare to FacebookShare to Pinterest
Labels: No Child Left Behind, Quotes, Standardized testing

“Should Schools Bribe Kids?” asks the cover of Time magazine. The subtitle then reveals “an uncomfortable truth -- it can work (if it’s done right).”

Here’s another uncomfortable truth: Beating kids works, too, if what you want is immediate behavioral compliance. Is whether it “works” the only question we’re allowed to ask about that practice?

My concerns about the use of bribes -- almost none of which are about whether it “works” -- are here.

What passes for school choice

Nine years ago, Stanford University started a charter school in East Palo Alto, to try to bring the benefits and resources of a great university and “state of the art instruction” to a struggling school district. This week, though, the local school board voted to close the school because of low test scores.

Unlike other nearby charter schools, which focus “primarily and almost exclusively on academics,” this school “focused on academics and students’ emotional and social lives.” The school’s supporters protested that test scores are “not the most accurate measure of student achievement, particularly if you have new English language learners.” The school “puts a lot of attention on a variety of skills and opportunities that don’t necessarily promote higher scores,” its president said. “If you’re just looking at test scores,” one student said, “then you don’t see what we’re learning.” Although the school’s high school completion and college acceptance rates were impressive, the board was unswayed by the school’s arguments.

This is why I have no faith in the “school choice” movement. Under the prevailing conception of what “school choice” means, families will have a choice among several schools that are all being measured by the same criteria -- which are, inevitably, based on standardized test scores. If what you want is a school that would aspire to fulfill a different set of criteria, forget it. No choice for you.

I suppose you know that behavioral rewards have made the big time when they land on the cover of Time magazine. The article, though, is a disappointment. It devotes five short sentences to a few of the actual objections that people (like me!) have to the use of rewards in school, then zeroes in on what it identifies as the crux of the debate: “But all this time, there has been only one real question, particularly in America’s lowest-performing schools: Does it work?”

The only problem is that that question has never been the crux of the debate at all. Even the most prominent opponents of behavioral approaches to education -- for example, Alfie Kohn -- admit that rewards can work to achieve short-term compliance with behavioral goals, and even to raise standardized test scores. They oppose the use of rewards anyway, because of its unintended long-term consequences and because of the values it embodies and conveys.

Time’s focus -- its suggestion that the “only real question” is whether rewards work -- thus completely misrepresents the debate. Leave it to Time to write a four-thousand-word article on the one aspect of a contentious debate on which everyone agrees.

One of the disturbing aspects of behavioral rewards systems like PBIS -- as these Connecticut parents point out -- is that they put “little or no emphasis on dealing with why the individual child is behaving unacceptably.” One doesn’t ask why a trained seal prefers to swim around than to spin a ball on its nose; one just pulls out the clicker and the barrel of treats and goes to work. So the same principles apply to “teaching” our kids to behave.

I thought about this aspect of PBIS as I read Marilynne Robinson’s new book, Absence of Mind. Her thesis:

I propose that the core assumption that remains unchallenged and unquestioned through all the variations within the diverse traditions of “modern” thought is that the experience and testimony of the individual mind is to be explained away, excluded from consideration when any rational account is made of the nature of human being and of being altogether.

What Robinson sees as the most distinctive feature of our species -- the conscious mind -- is now disparaged by many as a mere illusion, a kind of unreliable narrator, serving mainly to trick the body into pursuing whatever will propagate its genes to the next generation. Robinson makes the case that these understandings of the human mind, and of human nature, are inadequate, and that their claims to being comprehensive explanations of the human condition are comically overblown. Unsurprisingly, Robinson includes, on her list of such modern schools of thought, the behaviorists.

Which raises the question: What does it say about a society when the task of education, of all things, is turned over to people who believe in the fundamental unimportance of the conscious mind?

Everybody wants a creative child - in theory. The reality of creativity, however, is a little more complicated, as creative thoughts tend to emerge when we’re distracted, daydreaming, disinhibited and not following the rules. In other words, the most imaginative kids are often the trouble-makers.

Eric Barker recently referred me to this interesting study, which looked at how elementary school teachers perceived creativity in their students. While the teachers said they wanted creative kids in their classroom, they actually didn’t. In fact, when they were asked to rate their students on a variety of personality measures - the list included everything from “individualistic” to “risk-seeking” to “accepting of authority” - the traits mostly closely aligned with creative thinking were also closely associated with their “least favorite” students. As the researchers note, “Judgments for the favorite student were negatively correlated with creativity; judgments for the least favorite student were positively correlated with creativity.”

Lehrer then defends the value of daydreaming, pointing to research indicating that “a wandering mind may be important to setting goals, making discoveries, and living a balanced life.” Something tells me that this evidence, though, won’t find its way into our “evidence-based” “effective schoolwide interventions.”

“Institutions will try to preserve the problem to which they are the solution.”

Email ThisBlogThis!Share to TwitterShare to FacebookShare to Pinterest
Labels: Quotes

Some company in Connecticut

Apparently I am not the only parent driven to blogging by the use of the PBIS rewards program on our kids. I wish these parents the best, and would love to hear their thoughts as they push back against the assumption that our kids are best understood as objects to be manipulated rather than as human beings to be respected and engaged with.

I continue to believe that something like PBIS would never be initiated in a school system in which parents were the primary decisionmakers. Unfortunately, it seems like we are less and less in such a world (as I discussed here).

Here is as good a place as any for a compilation of previous posts on the topic of PBIS:

Alfie Kohn on our red tickets

The risks of rewards

And, since we’re on the subject of what an impoverished conception of our kids PBIS embodies, one more:

Our school’s behavioral rewards program (also known as PBIS) claims to be “evidence-based” and supported by “peer-reviewed randomized control trial research studies.” A closer look at the program’s materials, though, might lead someone to question whether it is truly informed by science, or whether it is simply bound and determined to put some scientific credentials on its marketing materials. Although the program cloaks itself in the language of science, it cannot contain its cult-like evangelical fervor, which bursts from virtually every page of its website.

The most striking aspect of the website is the contrast between the program's ambitious certitude, on the one hand, and the banality of its content, on the other. The program unashamedly seeks to pervade every aspect of a child’s world -- not just the hallways, playground, and cafeteria, but also the classroom, the community, and the home. It then summarizes that goal using helpful charts like this one (in case you’re more of a visual learner, I guess): 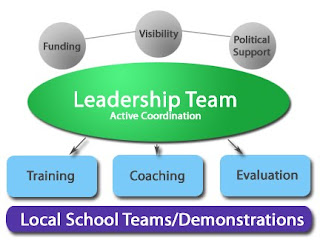 In the web page accompanying this chart, the program gives us its vision of education in a pithy two sentences that are far more revealing than was probably intended:

To ensure that our kids will become these high caliber employees and consumers, the site not only recommends that parents “participate on the leadership team” and even start distributing rewards tickets in the home (redeemable at school!), but also that local businesses be recruited into the program. For example (and I’m not making these up):

Grocery store chooses one student per week from gotcha [i.e., reward ticket] drawing to serve as an apprentice on Saturday at the grocery store.

Car oil change company gives out letters for the school to send out to exemplar students giving the parents 15% off their next oil change.

The site also urges people to cultivate political support for PBIS, and even to use the children as lobbyists on its behalf (“Have the students talk about what a difference Sw-PBIS has meant [sic] to them”). When the federal government was allocating its economic stimulus money, PBIS was ready with a brochure promoting the use of stimulus money for -- you guessed it -- PBIS. A remarkable amount of the site is dedicated to Amway-like discussions of how to talk other people into supporting PBIS.

One state’s PBIS advocates summed up the program’s mission in a nutshell (emphasis in the original):

to have EVERY teacher and administrator in EVERY school district in the state knowledgeable about and engaged in the use of Positive Behavior Supports as a means to enhance the learning of EVERY student.

Science, in its best form, is skeptical and self-questioning, and reaches conclusions only tentatively. Do these materials reflect a scientific mindset? Or do they reflect some weird amalgam of Madison Avenue pitching and messianic fervor?