Some thoughts about the proposed school closings . . .

Verdict: Yes, I wasted three hours of my life

Classic. The facilities steering committee holds several three-hour-long public workshops, at each of which the dominant sentiment is not to close any schools. It then holds one final grand community workshop, which hundreds of people attend, to present four scenarios – three of which would close schools, though none of which would close only Hoover Elementary. Again the clear favorite was the scenario that closed no schools. So what does the committee recommend? Close Hoover, and possibly two other schools as well.

What’s worse than a public body that ignores public sentiment? One that solicits it endlessly before ignoring it.

Some facts about Hoover Elementary (and a little opinion, too)

At each of our district’s several community workshops on facilities planning, the dominant sentiment has been that we should not close any elementary schools. Nonetheless, the discussion about possibly closing Hoover Elementary, and giving the property to neighboring City High – possibly for a parking lot – continues. Some have argued that Hoover doesn’t really count as a “neighborhood school,” that many of its students come from outside the neighborhood, that many kids in the Hoover attendance area attend the private Regina School, and that closing Hoover wouldn’t impact that many families. Put simply: those are serious misperceptions. Whatever you might think about what “neighborhood schools” are, or about the importance of preserving them, the discussion should at least be grounded in facts. Here are some facts about Hoover:

1. It’s hard to pin down how many kids at a given school live within “walking distance” of it, even using the district’s own two-mile bus-eligibility definition. But it’s clear that Hoover serves more kids in its neighborhood than most other elementaries. Here’s how Hoover compares with other older schools in terms of how many kids are not eligible for the bus: 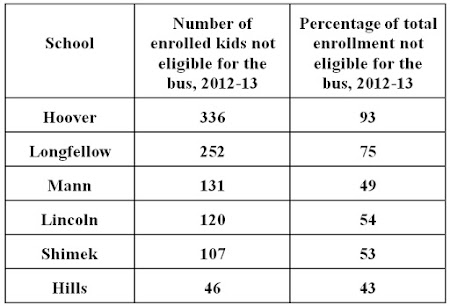 That’s not the whole story, though, because kids who transfer in from other attendance areas may live far away and still not be eligible for a bus. But we also know how many students live within a mile of their school – a much stricter definition of proximity: 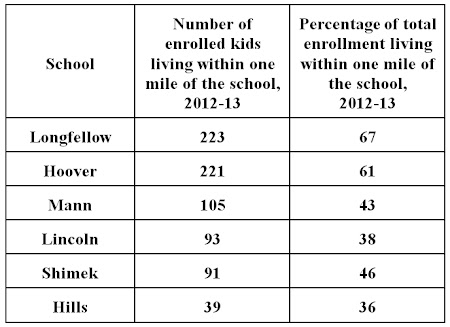 2. In fact, every child in the Hoover attendance area lives within walking distance of Hoover. (The remainder are voluntary transfers.) That isn’t true of Shimek, Mann, Longfellow, Lincoln, or Hills. Hoover also enrolls more kids from its own attendance area (232) than Lincoln (201), Mann (190), Shimek (147) or Hills (80) – many of which have much more far-flung attendance areas.

3. Four years ago, Grant Wood Elementary was designated a SINA school, which meant that the district had to allow Wood families the option of transferring to another school. The district designated Hoover as the school that would receive those students. Hoover quickly made the adjustment and many new families became a part of the Hoover community (though it did have to add a temporary building to create new capacity). Now some are using that decision as a rationale for closing the school – on the grounds that it is not really a “neighborhood school.” As shown above, the statistics do not bear out this claim; moreover, Hoover should not be worse off for having served the district when there was a need.

4. As older schools go, Hoover is a relatively large facility. It currently enrolls many more students than many other older schools. Compare: 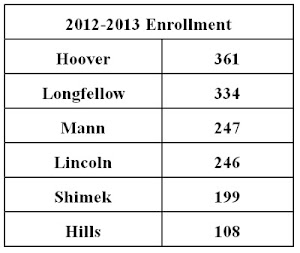 And that’s not even counting the kids in other programs (two autism classrooms and a preschool) that are currently housed at Hoover.

Hoover also has significantly more capacity than those schools: 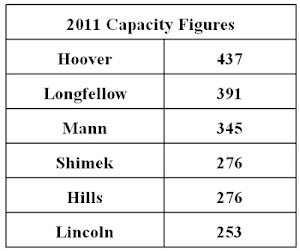 The district’s consultants believe that the district’s 2011 figures overstated capacity, but there’s no reason to think that Hoover isn’t still large relative to the others. (I was unable to find the consultants’ determinations of current capacity.) Even with the additions to those buildings proposed under Scenario 1c, Hoover would have significantly more capacity than many other older schools: 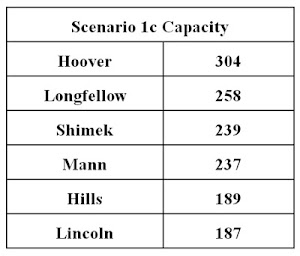 Take a close look at those capacity figures. Hoover is the school people want to close as part of an effort to increase capacity?

5. Hoover’s percentage of kids receiving free and reduced-price (FRL) lunches (21) is pretty close to the district average (32) – closer than that of Lincoln (4), Shimek (12), Longfellow (16.5), Mann (48), or Hills (59.5). Given that the board has committed itself to the goal of balancing FRL percentages across elementaries, why close a school that is already helping achieve that goal?

Here’s the full-fledged opinion part: Two of my kids go to Hoover, though they are old enough that they are unlikely to be affected by any closure. But for as long as we’ve been attending Hoover, some people have been talking about how the property could be given to City High. Anyone focused on the high school is naturally going to think of uses for nearby district-owned property. But elementary schools are no less important than high schools. And, given that we’re going from two high schools to three, it’s not clear why there is a pressing need to make City High larger.

Moreover, closing any older school could potentially generate efficiencies that could be used to benefit City. If Hoover is closed to augment City, there is no reason to think the same logic won’t justify the closing of Mann, Longfellow, Lincoln, Shimek, or Hills. A commitment to neighborhood elementary schools isn’t much of a commitment if it applies only when there is no other competing priority.

I oppose closing any of our elementaries. I don’t want this post to be understood as arguing that other schools are more worthy of closure. But I want to make sure that people are aware of the good arguments why Hoover should not be singled out for closure. Hoover is a big, economically diverse school with a very high percentage of walking-distance kids. It’s a model for what we should want a neighborhood school to look like. If we’re trying to increase capacity, preserve neighborhood schools, and promote economic diversity in student populations, why even consider closing it?

I’ve tried to use the most official and accurate sources for the information I’ve presented above. If you think I’ve misstated or misinterpreted any of the figures, please let me know in the comments.

UPDATE, 6-19-13: I’ve amended the discussion in Item #1, above, to reflect my ongoing attempt to pin down the issue of proximity.

UPDATE, 6-19-13: At its meeting earlier tonight, the Steering Committee recommended that the district close Hoover, and possible Lincoln and Hills as well. No one will accuse the Committee of caring about public buy-in. New posts here and here.
.
Posted by Chris at 7:22 PM 3 comments: 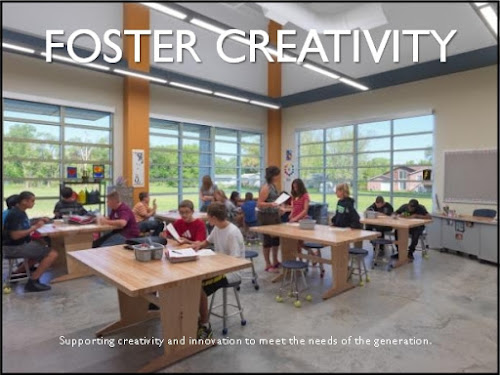 Photo from the consultants’ presentation
In the course of our district’s facilities planning process, we’re hearing dazzling visions of what the Classroom of the Future will look like. In the future, the district’s consultants tell us, education will be “student-centered,” so:


Buildings and grounds should provide a variety of spaces for hands-on activities, project-based learning, student collaboration, research and study space, and presentations.

The consultants showed us pictures of spacious classrooms where students work together at communal tables, while teachers work with one or two students at a time. None of the pictures showed a classroom with more than sixteen students in it.

The process has succeeded in getting at least some in the community talking about what kind of education we should be designing our schools for. I’ve recently heard parents, for example, envisioning classrooms in which the teacher is the “guide on the side” rather than the “sage on the stage,” and where students spend more time working collaboratively on solving problems, and where there is more “critical thinking” and less rote memorization.

That conversation is great to hear, even if it is just in its early stages. But I have to wonder whether we’re deceiving ourselves that “student-centered” education is the wave of the future. Everything indicates the opposite. State and federal laws have increasingly imposed a standardized vision of education on all kids. The newly imposed Iowa Core standards require teachers to cover a very particular—and extensive—body of content in each grade. They are accompanied by lengthy standardized tests to make sure that everything on the list gets covered. And “accountability,” many argue, requires us to make teachers’ jobs and raises depend on how well their students do on those standardized tests. Meanwhile, our state’s education department has taken the position that “improving educator effectiveness” is a better use of money than reducing, or even maintaining, current class sizes.

If your job depends on making sure a big group of kids knows an extensive, predetermined body of knowledge well enough to score high on a standardized test, how much project-based learning will you allow? How much will you be a “guide on the side”? How much time will you have to “foster creativity”? Anyone want to guess how the desks are arranged in a Kaplan SAT prep class, or how much independent inquiry goes on there? I’m afraid that’s what our standardized-test-driven future looks like.

Our district decides what the buildings look like, but the state and federal governments decide what goes on inside them. During the facilities planning process, we’re being encouraged to picture our dream schools. Once the money is spent and the buildings are built, what type of education will we actually get?
.
Posted by Chris at 11:56 PM 8 comments:

Did I just waste three hours of my life?

I’ve been relying on Karen W. for commentary on our district’s ongoing facilities planning process (see posts here and here). But Karen was unable to attend last night’s lengthy “community workshop,” so I’ve written up some thoughts of my own. They’re over at the Patch.