During the first week of school, as part of our district’s “guidance curriculum,” the fifth- and sixth-grade classes started a unit on study skills. To introduce the unit, the teacher put a page up on the overhead projector with the heading, in large letters:

The page then contained a list of statements, including:


Your performance in school determines the quality of your future life: size of income -- person you marry -- station in life -- satisfaction from spare time activities -- etc.

Up to one third of your life is spent in school.

Your main job at this time is studying, being a student.

You are “paid” with knowledge and grades for going to school.

Getting high grades is only one of many rewards of a good student. Even more important is the satisfaction that comes from a job well done -- the best job you are capable of doing! PRIDE!

Studying will be a burden unless YOU do something to make it enjoyable.

The skills you learn and the habits you adopt will remain with you throughout your life.

You become an expert only after continual practice.

Unless you work with each skill repeatedly, the skill will be lost!

Reward yourself if you do a good job.

Where to begin? How about with the outright falsity of what they’re teaching these kids? Your performance in school -- in fifth grade, no less! -- determines the quality of your future life? The person you marry? The satisfaction you get from spare time activities? These are the kind of pseudo-scientific factoids that our kids should learn to be skeptical of. Instead, they’re encouraged to swallow them whole: YES, IT’S A FACT! Please, show me the empirical research supporting these assertions.

I’m sure one could find studies showing correlations between, say, high school or college grades and income. Correlation, of course, doesn’t prove causation, because another cause -- socioeconomic status? -- might be driving both variables. But even if you could prove that getting good grades in college has, for many people, some independent effect on income, it would still be false to say that your performance in fifth grade, or any grade, “determines” the quality of your future life.

As one girl said to her friend, “You should have brought up Einstein.” Or, I thought, George W. Bush.

Second, “station in life”?! Does the district really mean to teach that everyone has a “station in life” that is fixed by the time they finish school? And to pass that “fact” along without any reflection on whether it is just or unjust?

As another parent said after reading the list, “It’s as if they’ve never been intellectually interested in anything in their lives.”

Finally, what about the kids who are struggling? What will this do to their motivation? If they’re trying hard and still not “performing well,” what message -- other than frustration and despair -- will they take away from this presentation, as they anticipate their lowly, inevitable, and apparently deserved “station in life”? 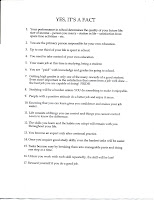 The "person you marry" statement is weird and creepy...especially for that age group.

The "station in life" statement seems like it be especially problematic in a place like Iowa City...does it mean anything less than academic excellence and advanced education makes for a negative quality of life?

The worksheet is weird as well I think. Is it really necessary for the child to spend time recording what the behavioral expectations are at home?

Oops -- wrong worksheet. That was one from last year's Social Thinking program. I'll fix the image.

The two things that disturbed me the most were:

1) The use of the word "determines" in the first dot point, which you have already addressed in your blog post.

2) The 10th point. "Knowing that you can learn." People should have that awareness anyway and if they don't then that's probably because it's being beaten out of them by the system of grades and the "look how many people failed, our standards must be amazingly good" mentality.

How about this one?

***
Studying will be a burden unless YOU do something to make it enjoyable.
***

What exactly do they expect the kids to do to "make it enjoyable"? Drugs? What?

I think it should be the school's job to make sure they don't waste the kids' valuable time. If the kids are only assigned tasks that are actually worth doing, maybe study won't be such a burden. I know, I'm a radical --

This is almost cruel. 5th-graders have zero control of their education. They can't decide what to learn or how to learn it. They have no personal freedom during the school day.

In other words, if the kids don't learn, it's all their own fault. Don't blame the school (which is wasting everybody's time with stupid "guidance"), and don't blame the teachers. It's the child's fault! She should have taken control of her own education and taught herself what she needed to know!

Maybe we can eliminate the time spent on "guidance" and PBIS...then we can go back to having longer lunches.

I wonder is "Yes, it's a fact" was something produced by our school system? I find it odd that a teacher would find it appropriate to discuss in the classroom without feeling uncomfortable.

I looked up the guidance curriculum on the ICCSD website. It doesn't say very much. Wonder what other surprises are in store this year.

KD -- My thoughts exactly. It was the Guidance program that gave us Social Thinking last year. What next?

FedUpMom -- How about "Life consists of things you can control and things you can't control. Learn to know the difference"? Apparently having this presentation inflicted on you falls into the latter category . . .

KD -- I don't know for sure, but it's my sense that this is something developed by our district. It doesn't seem to come from any published curriculum that's already out there.

Hienuri -- Thanks for commenting! Yes, do they really think the kids don't know that they can learn, and that they have to correct that misimpression?

Such a joke. Both 2004 Presidential nominees were slacker C students.

Re: the use of the word "job." It's kind of ironic given that these students' teachers (from K through college) are often derided as not holding down "real jobs" out in the "real world" . . . .