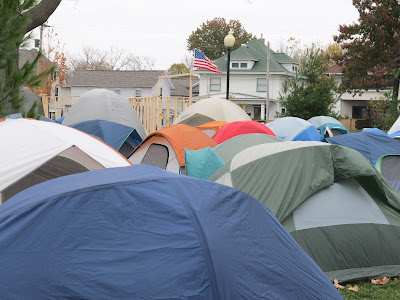 Occupy Iowa City encampment, College Green Park
A reader points out that Occupy Iowa City, our local offshoot of the Occupy Wall Street movement, has posted a statement of principles that includes these paragraphs:


We witness the degradation of public schools which do not provide the skills needed for creative and free thought, or for full participation in economic or political systems.


. . .
We affirm the necessity of affordable public education for all people, so that they may be fully informed, creative and curious participants in a just society.

I’m very sympathetic to a lot of the concerns that the Occupiers have raised, if not to all of them in every particular. Those statements about education are, of course, unspecific and designed to appeal to a broad range of people. But I don’t think I’m projecting -- especially given their other principles -- when I conclude that the protesters would probably share my concern about public schools that seem designed to produce compliant subjects of a totalitarian state rather than skeptical, questioning citizens capable of participating in a democracy.

I’m also glad to see any acknowledgment that the disturbing economic and political trends in our country -- the increasingly authoritarian view of government, the decline in civil liberties, the two-tiered system of justice, the disproportionate influence of the wealthy, the militarism, the pitting of people against one another to fight over a smaller pie -- might be related to how schools are treating our kids.

I don’t know where this movement will go, but right now, these people are saying some things that need saying.

Interesting somewhat related article here http://www.americanindependent.com/200952/mayor-bloomberg-trust-donated-big-to-louisiana-education-board-elections about a Bloomberg trust (michael bloomberg) giving big $$ to LA board of education election "reform" candidates. In my mind this is the type of big money control and power a lot of what the Occupy movement is about.

Thanks, Mandy. Here's the clickable link.

One reason I like the idea of local control over educational policy is that it's easier to buy 535 members of Congress or 50 state education boards than it is to buy 15,000 local school boards.