“The point is that it works!” 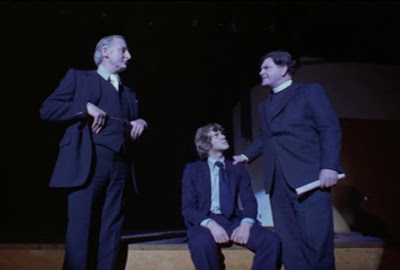 I’ve posted before about how our school’s elaborate behavioral rewards program, PBIS, teaches the kids to adopt the most primitive form of moral reasoning: “I should do as I’m told because then I’ll get a material reward.” In fact, by attempting to elicit automatic, unthinking responses to the prospect of a reward, the program arguably tries to short-circuit moral reasoning entirely. When I point that out to people who work in the schools, though, they inevitably respond with some variation of “But it works!” What they mean is that it increases compliance with school rules and reduces office referrals. They have no idea what effects it might be having on the kids’ values, and on their sense of right and wrong, and they don’t care. If it increases compliance and reduces office referrals, how could anyone object?

I couldn’t help but think of those conversations when I recently re-watched parts of A Clockwork Orange (prompted by my mention of it in this post). The story, as you probably already know, is set in a dystopian world in which violent young hoodlums roam the streets raping and murdering. One of them, Alex, is caught and subjected to an elaborate behavioral modification treatment designed to make him physically ill whenever he is tempted to do wrong. In one scene, the Minister of the Interior demonstrates the effectiveness of the treatment by bringing Alex, who has been “cured,” in front of an audience of government officials. A man comes on stage and insults and assaults Alex, but Alex does not fight back. A nearly naked woman appears on stage, but Alex’s arousal makes him fall ill. At the end of the demonstration, the prison chaplain protests:


Prison Chaplain: Choice! The boy has no real choice, has he? Self-interest – the fear of physical pain – drove him to that grotesque act of self-abasement. Its insincerity was clearly to be seen. He ceases to be a wrongdoer. He ceases also to be a creature capable of moral choice!

Minister of the Interior: Padre, these are subtleties. We are not concerned with motives, with the higher ethics. We are concerned only with cutting down crime! And with relieving the ghastly congestion in our prisons. He will be your true Christian, ready to turn the other cheek, ready to be crucified rather than crucify, sick to the very heart at the thought even of killing a fly. Reclamation! Joy before the angels of God! The point is that it works!

Wouldn’t that Minister of the Interior make a great PBIS Facilitator?
.
Posted by Chris at 12:05 AM