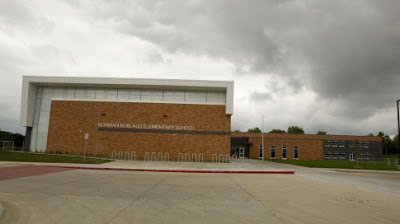 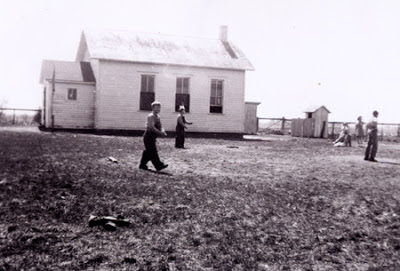 One-room schoolhouse, Johnson County, Iowa, date unknown (source)
A couple of years ago, people in our school district were intensely engaged in debating possible boundary changes between attendance areas. Now, we seem to have moved on (after making only very minimal boundary changes) to the topic of improving facilities and possibly building new schools. Having been unable to prioritize its building needs without angering large groups of people, the school board will apparently propose a bond issue that purports to fund everyone’s desires at once.

I didn’t write much here about the issue of boundary changes, and I expect I won’t write much about the facilities issue either. It’s not that I don’t think the issue is important; many of the arguments for facilities improvements are very persuasive. (I’m not sure whether to be happy or sad that our school’s roach infestation might get addressed in the district’s long-term plan.) But so much energy goes into discussing buildings and boundaries, and so little into discussing what goes on inside those buildings.

Will the conversation ever turn to whether we are offering a meaningful, humane education? To whether the district is too myopically focused on standardized testing, and whether it has taken a wrong turn with its increasingly authoritarian emphasis on behavior and discipline, and whether its curriculum is too lock-step and unengaging, and whether its demands on the kids are justified and developmentally appropriate? To the values that the district stands for, and its understanding of how people learn, and its conception of what it means to be well-educated?

Facilities aren’t entirely irrelevant to those questions. But given the choice between continuing our district’s current educational approach in shiny new high-tech buildings and pursuing a meaningful, humane educational experience in run-down World War II Quonset huts, I’d take the Quonset huts in a heartbeat.
.
Posted by Chris at 4:23 PM

I think Nick Johnson touched on this issue a short while ago on his blog, noting that it is really hard to make a facilities plan without regard to the educational program--otherwise, how do you know what to build? Buildings to support Montessori, blended learning, or more traditional looking programs are going to be different in some way from one another--maybe substantially.

"As I used to tell my colleagues, 'Normally before you ask an architect for advice you know whether you want to build a courthouse or an outhouse.' Only the board can decide what they want to do inside those school buildings -- not an architect, a committee, or a consultant. If they think team teaching and block scheduling are a good idea the walls will be in different places. If the board is persuaded by the available research that the optimum size of a high school is about 800 students, that will affect the size and cost of any new high schools. If the board decides, as advised by the National Commission for the High School Senior Year, that the best place for high school seniors is out of the high schools, that may reduce the 'overcrowding' that dictates the need for new buildings.

The same thing can be said regarding school boundaries, class sizes, allocation of students from low income or homeless families. These all involve decisions that should be assumed, personally, by board members -- legally, politically, morally, and administratively -- not 'contracted out' to the superintendent, committees, or consultants."