Use existing space instead of building expensive additions 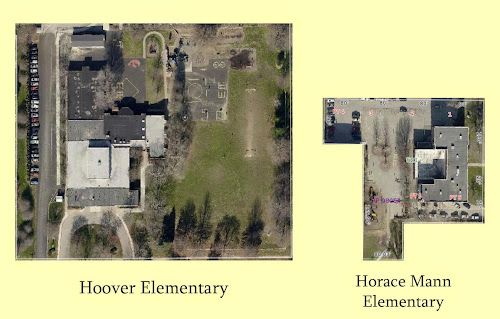 Guess which lot the district plans to build a 180-student addition on.

The district’s recently released possible “updates” to the facilities plan contain a lot of bad ideas—for example, one would close three more elementary schools—but one good idea: cancel the planned additions to Mann and Longfellow schools.

Horace Mann Elementary needs a thorough renovation, air conditioning, and a multi-purpose room, but it makes no sense to build a 180-student addition—increasing the school’s capacity by 76%—on the smallest lot (by far) in the district. As it is, there is barely room for a playground and parking on the Mann property. Adding 180 seats there—and another 180 kids getting dropped off in the morning—is madness.

It makes even less sense when the district is simultaneously planning to close a much bigger school on a much bigger lot less than two miles away. The point of the Mann addition isn’t to accommodate growing enrollment; it’s to absorb the loss of capacity caused by closing Hoover, and to move toward a vision of fewer, larger elementaries, farther away from where the students live. (Longfellow, too, needs renovation and improvements, but not the 150-student addition that’s currently planned and which is necessary only because of the Hoover closure.)

Yes, there’s a park next to Horace Mann. There has been some talk of taking the park for the school district, but it’s not at all clear that the district will be able to do that. (Would the neighborhood want that? Would the City agree? Would the park then be fenced in?) In any event, even with the entire park, the lot would still be very small, the drop-off and pick-up would still be a nightmare, and Hoover’s lot would still be almost twice as large.

Unfortunately, the district’s latest “updates” don’t keep Hoover Elementary open. They would cancel the Mann and Longfellow additions, but just to replace them with different additions onto other schools. One way or another, the district will have to build over 300 new seats of capacity if it displaces over 300 kids from Hoover. That’s a lot of money wasted.

At some point, the district is going to ask voters to approve a bond to pay for the projects in the facilities plan. Most of the projects are worthy, good investments. But people are naturally going to think twice about spending millions of dollars just to tear down one school and then rebuild the lost capacity onto other schools. The sooner the district comes to its senses about Hoover, the better for all the worthy projects in the plan.
.
Posted by Chris at 2:15 AM