Our school, for example, explains the meaning of "Respect" to the students this way:

Hallway: Go directly where you need to go. Use body basics.
Lunchroom: Body basics. Voice level 1 or 2.
Playground: Line up quickly when the bell rings. Use line basics.

If your child asked you what "respect" is, is that what you would say?

To show "Responsibility" in the hallway means to "Use line basics," and "Voice level 0 or 1." (Apparently the line between responsibility and respect is a very thin one.) To be "Caring" on the playground means to "use equipment appropriately," and "return equipment." To show "Honesty," you should "follow the rules even when an adult is not around," and "play fair and follow [school] game rules." To show "Courage," on the other hand, is to "follow the rules even if others don't."

To be fair: not all of the definitions focus on obeying rules. (For example, to be "Caring" means to "greet others with a smile and wave," and to "care for self, others, and school.") But most of them do.

Again, I know that schools need to have rules. But it's another thing to create a culture that prizes obedience to authority above all other values. It may serve the school's interest in maintaining order, but does it serve the long-term interests of the kids -- or, for that matter, of democracy? Does it develop character? And what message does it send when words like "courage," "responsibility," "respect," "caring," and "honesty" are co-opted in an effort to keep the kids quiet in the halls? 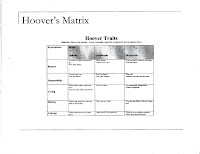