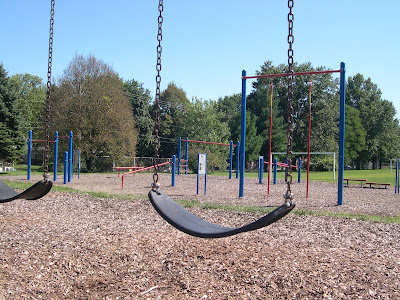 Over at Parenting is Political, northTOmom is arguing against cutbacks in recess time in Toronto elementary schools. Students there currently get two fifteen-minute recess breaks, plus an hour-long break for lunch/recess. Under a new system that is being implemented in many Ontario schools, they would get two forty-minute breaks, with each one evenly divided between time to eat and time to play. That would give the kids twenty more minutes to eat, but thirty fewer minutes of unstructured play.

I hope Toronto holds the line against cuts in recess time. I wonder what they would think of Iowa City, where my fifth-grade daughter gets one thirty-five minute break for lunch and recess combined, plus a five-minute bathroom break, and that’s it until she goes home at three o’clock.
.
Posted by Chris at 9:45 PM

Here's an interesting discussion on a bento blog!

Poll: How long do your schoolkids have for lunch?

Thanks for that link, FedUpMom. Notice that "15 minutes or less" was the shortest period you could choose, and only 10% of the respondents chose it.