Just kidding. But the Answer Sheet has a good post by Kevin Weiner about why last night’s Oscar winner for best documentary, Inside Job, tells us more about the problems of education reform than the much-discussed Waiting for Superman. Weiner notes that Inside Job focused on “(1) the advocacy of deregulation in order to free up innovation, (2) hubris and general belief among hedge fund titans that they are infallible, and (3) increased wealth inequality.”

If Superman had explored these issues instead of bashing unions and promoting charters, moviegoers might have walked away understanding a great deal about why the families it profiled and so many similar families across America face a bleak educational future.

The movie certainly showed scenes of poverty, but its implications and the structural inequalities underlying that poverty were largely ignored. Devastating urban poverty was just there -- as if that were somehow the natural order of things but if we could only ‘fix’ schools it would disappear.

While you’re reading it, keep this chart in mind (from Alex Knapp at Outside the Beltway): 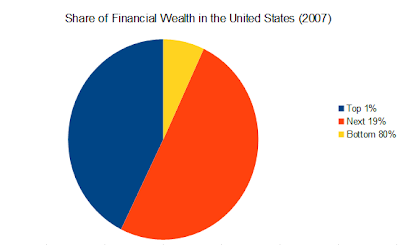 I’ve complained before about our schools’ obsession with behavior management at the expense of thought and inquiry. But I can see why the people in the blue slice above might be more interested in teaching the kids in the yellow slice to behave than in teaching them to question things.

I haven't seen either movie. My impression of Waiting for Superman is that the schools profiled in the movie have little accountability to the communities they serve.

Both my parents and my in-laws experienced periods of major poverty growing up. I think something has changed between now and then with regards to our schools operate.

Of course, there's always the possibility that if the yellow and orange slice people become too obedient, the pie will just be all blue. Not that it's a problem for those in the blue slice, but...

Stoz -- Purely as a mathematical matter, the pie cannot be all blue. A bluer pie would just mean that the wealth disparity between the richest one percent and everyone else was even greater.

But, yes, there's always the possibility that turning our schools into obedience schools will help the poorer students get richer. I would just say that "there's always the possibility it will work" is an awfully low standard to apply to public policy claims, especially ones that seem particularly likely to advance the interests of people other than their ostensible beneficiaries.

KD -- I agree that things have changed, and not for the better. What changes in particular are you thinking of?

I think Stoz is saying that if the bottom 80% become too obedient, the top 1% will steal everything, and the whole pie will go blue.

Loosely speaking, I think he/she's on your side, Chris. And I agree with you both!

FedUpMom -- Ha, I didn't mean for that comment to sound as argumentative as it did. I need some more argumentative commenters, so I can take it easier on friendly ones like Indie and Stoz!

Chris...what has changed...it seems like at some point we assume that kids who come from poverty are destined for failure.

I went to a religious based school for 12 years, so I have no experience as a public school student to draw on. I guess I once had some sort of naive notion that public education was supposed to be an equalizer of sorts.

I don't see PBIS as necessarily harmful, but I do see it as a waste of time that takes attention from what the schools should really be doing. Did the schools of years ago have systems like that?