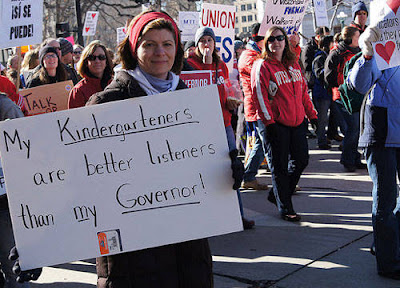 After a month in which we’ve watched protesters in Middle Eastern countries bravely taking to the streets carrying signs denouncing autocratic regimes, and crowds of people in Wisconsin rallying with signs to protest the governor’s attempts to slash school funding and break teachers’ unions, what was on the agenda at last night’s school board meeting in Iowa City? A proposal to . . . prohibit people from carrying signs at school board meetings.

The proposal, which the board had approved on its first two readings, failed on its final reading last night on a vote of 3-3, apparently because one of its supporters happened not to attend the meeting. Its supporters had justified the proposal on the grounds that it “was necessary to keep control of board meetings,” and because “some signs and placards could cause some members of the audience to not speak out, particularly when there are several people speaking on a hotly debated topic.” Credit goes to Tuyet Dorau, Michael Shaw, and Sarah Swisher for voting against the proposal.

Leave it to our public school officials to suggest that the government should control the way in which people peacefully express themselves at a public meeting -- because otherwise things might be, you know, chaotic or scary! It’s one more example of the school system’s reflexive attachment to order and control at the expense of all other values. Free expression, limitations on authority, tolerance of dissent -- those are hallmarks of meaningful democracy. Why are my kids being educated by people who seem to find those things so frightening?

The sign controversy is certainly one of the most absurd moments in the history of the Board. Thank goodness the sign haters did not get their way.

KD -- I'll say. What I don't get is: being on the school board is such a thankless, time-consuming job, for no pay. Why would they go out of their way to spend their valuable time on dumb idea like this one?

Oh no, Chris, you stole (well beat me to it, is more like it) the title I was going to use for one of my forthcoming posts! (It's currently collecting virtual dust in my drafts file). I thought I was the only one who remembered that hit song (their only one?) from the largely unknown Canadian band, Five Man Electrical Band! Interestingly, my post was/is going to talk about the opposite problem: the abundance of signs within schools whose purpose is to aid in the controlling of students. I was even going to dust off my old grad school Althusser, for this one. But the issue you're addressing above is just as important and equally sinister. It's almost hard to believe how far your board seems willing to go to snuff out dissent.

Anyway, I hope you won't mind if I still use the title (or a version of it) if/when I complete my post.

NorthTOmom -- That's funny, as I was using that title, I thought: it would actually fit better in a post about all the "hallway expectations" and "lunchroom expectations" and "playground expectations" posters that are up all over the school. Do this, don't do that, can't you read the sign?

But in the end I couldn't resist anyway. It's a real earworm, of the enjoyable kind.

But yes, it fits your post better -- can't wait to read it!