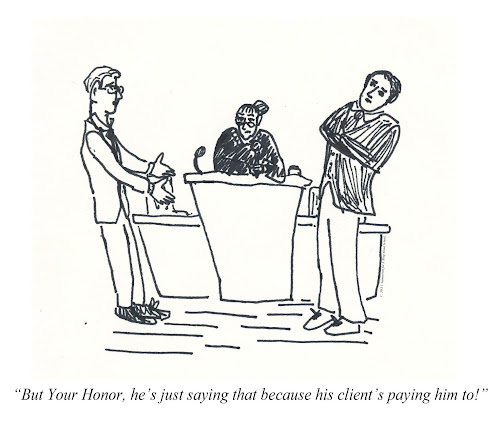 As I wrote yesterday, some people have reacted to our school district’s proposed diversity policy by questioning the motives—or, ominously, the “ulterior motives”—of the people who disagree with them.

I won’t say motives never matter; if you’re relying on someone’s expertise, for example, it helps to know whether a conflict of interest might bring that expert’s credibility into question. But compulsively focusing on a speaker’s motive very quickly turns into an ad hominem distraction from the actual substance of his or her argument.

So, just a reminder: The soundness of a policy argument does not depend at all on the motives of the person making it. An argument stands or falls on its own merits, regardless of whether it comes from the mouth of a hero or a villain. A bad motive doesn’t discredit a good policy, and a good motive won’t save a bad one.

People seem to find it very tempting, when they get worked up about political issues, to talk about motives or personalities or credentials or scandals or behind-the-scenes maneuvering—just about anything other than actually engage the substance of an argument. If that were less true, maybe fewer people would get freaked out by the disagreement and conflict that are an unavoidable part of the democratic process.

I think that War on Grammar book I read last fall had a bit about this. I think his thesis was that formal grammar instruction led to focus on the words for determining meaning--and that, instead of that training, students are being trained to "detect bias." In other words, being trained to focus on the speaker/author instead of the words themselves--leading to what you describe here.

Hi, Chris: You are sounding rather (well, can I say) "priggish" this evening or would that be too ad hominem? (Joking here)

Here you land on some interesting word choices--"compulsively" and "tempting"--to characterize the behavior of people who engage in the types of argumentative practices that you find insufficiently attentive to the substantive merits of a given policy debate. It seems to me that a more productive approach would be to give the people who mount those sorts of arguments more of a benefit of the doubt in the sense that you could start from the assumption that they are intentionally framing the argument in the way that best reflects their views and the contribution they wish to make to public debate. Neither temptation nor compulsion is necessarily part of the picture.

Doris -- Points taken. I think I used "tempting" because I know I'm sometimes tempted by it myself. "Compulsively" was a little harsh, but it really does seem like the first resort in much of the discussion that goes on about local school issues. It may really reflect the contribution people want to make to the debate, but it doesn't strike me as very persuasive contribution. I'd really like to hear the arguments pro and con about the diversity policy.

Karen -- Interesting. Maybe the solution is not so much formal grammar courses but logic courses, so people could more readily identify logical fallacies. There are times when motive actually is relevant, so it's kind of a complicated topic. I certainly never learned about logical fallacies in school.

Sorry, everyone, I'm trying to keep up with the comments, but life is slowing me down. More soon . . .

I would have loved a logic course--I didn't learn about logical fallacies in school either. I suppose it isn't surprising that a grammar prof would recommend more formal grammar though.

I will say that it isn't realistic to argue that some people are self-interested and others are entirely self-less in this (or any other) school policy debate. It seems there is a clash of value priorities here (neighborhood schools versus a vision of equity that involves more equal distribution of FRL kids throughout the schools) and it might be more productive to talk about how to balance those values in a diversity policy that actually benefits students. Plus, it sure looks like the unresolved two or three comprehensive high school debate is playing a role here too. . . .

What you need is Logical Fallacy Bingo! Bring it to the next School Board meeting ...

Btw, Chris. Fabulous cartoon. I hope we will see more work on your blog from I. Samuelson!