Cause and effect (or How to rationalize a school closure)

The Hoover closure continues to be the decision in search of a rationale. The few attempts to articulate one have a distinctly post-hoc feel to them. One of them is the idea that “there are too many schools close together without enough enrollment to support them.” To back up this assertion, closure proponents cite the district’s latest enrollment projections. Those projections show a precipitous thirty-four percent drop in the projected enrollment at Hoover, which would have, at one point, as few as 199 students!

Looking at those projections, you would think that a big chunk of Iowa City’s east side—an area filled with residential homes—was on its way to becoming a ghost town. Or is there another explanation?

Take a look at what Hoover’s enrollment projection looked like right before school board voted to close it (click to enlarge): 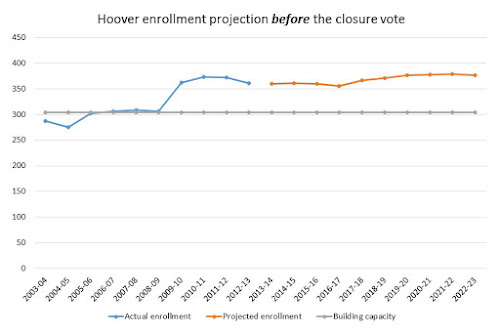 Yes, just two years ago, the district projected that Hoover’s enrollment would remain well above its capacity for the foreseeable future.

This year, almost two years after the closure vote, the district’s new enrollment projections for Hoover look like this: 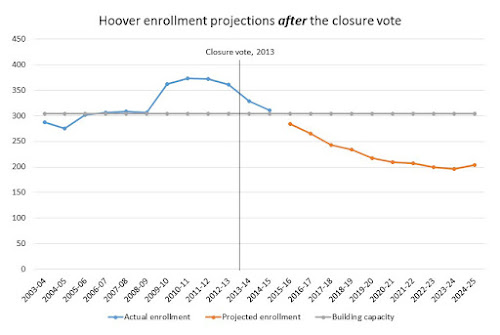 That year when the district says that enrollment would be only 199? Right before the closure vote, that same projection was 376.

There are plenty of students to fill the schools surrounding Hoover, too, without any stretching, gerrymandering, or contortions, even under the most recent projections. Yes, there are two new schools being built, but the whole reason for their construction is that they will not only relieve overcrowding at existing schools but also accommodate (and spur) new development that will generate its own enrollment. Without Hoover, central Iowa City schools such as Longfellow, Shimek, Mann, and Lincoln are likely to remain over capacity even after the new schools open. More in another post soon.