Putting the schools where the students are

In my last post, I wrote about why it makes sense to open the two new east side elementary schools below capacity and allow them to grow as their neighborhoods become more developed. One of the main reasons to do so is that it those schools cannot be filled immediately without using very disruptive rezoning contortions.

One way to see why that’s true is to look at the district’s student density map. It’s worth clicking on that link and perusing the whole thing. But here are a few highlights. First, here is an overhead view of the area around newly-built Alexander Elementary:

(The numbers represent number of elementary schoolers in each square; the more students, the darker red the squares are.)

Here is the area around the future site of the East Elementary:

Here, by contrast, is the area around Hoover Elementary (shown at the same scale):

Not all of that area goes to Hoover, of course; it couldn’t possibly fit. But the maps give you a good idea of why there are so many schools on the central east side: because that’s where the students are. Zoom out the see the broader east side: 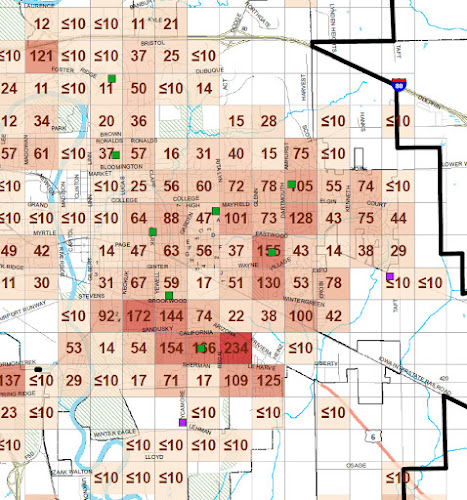 You can see that it won’t be hard to draw attendance zones to fill the existing schools (which I’ve marked with green squares). What would be hard is finding 500 kids to put at each of the new elementary schools (the purple squares), which would take some serious gerrymandering. The solution is to keep the existing schools open and allow the new schools to start medium-sized and grow into their capacities.

School board members have said that their goal is to “put the schools where the students are.” It’s hard to take that literally, given where they’re building the new schools; it makes more sense to see those schools as an investment in the future. In the meantime, the student density remains concentrated around the existing schools. The district will need to keep them—including Hoover—open.
.
Posted by Chris at 1:46 PM

Excellent critique! Too bad you're not on the school board.

Excellent critique. Too bad you're not running for the school board!