In the discussion of our district’s facilities plan, the idea that “there aren’t that many kids who live in the Hoover attendance area” has been the zombie factoid that will not die. As I’ve pointed out ad nauseum, the population of the Hoover area is not projected to grow significantly because it is a densely populated area that is already filled with houses. Yes, Hoover currently serves a number of students from farther away who have chosen to transfer out of “schools in need of assistance” under No Child Left Behind. But Hoover also currently has two temporary classrooms; shouldn’t we want its enrollment to shrink some?

Hoover serves more kids in its own enrollment area (232) than Lincoln (201), Mann (190), Shimek (147), or Hills (80), and those schools have much more far-flung attendance areas. Hoover has 129 transfers, but all the schools have transfer students; the district average is 60 per school. Finally, the boundaries will certainly be redrawn anyway; the point is that Hoover is a relatively big school in a densely populated, economically diverse area and can easily be filled in any redistricting scheme.

But a picture is worth a thousand statistics. Here is an overhead view of the area around Hoover (click to enlarge). See if you can estimate the number of houses. 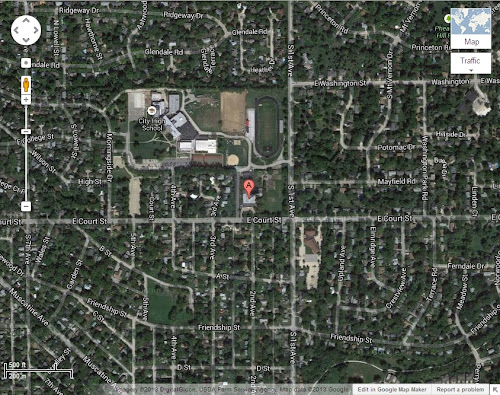 By contrast, here is a same-scale overhead view of Borlaug Elementary, which opened when the district closed another school in a densely populated area (Roosevelt Elementary) four years ago. See if you can – oh, never mind. 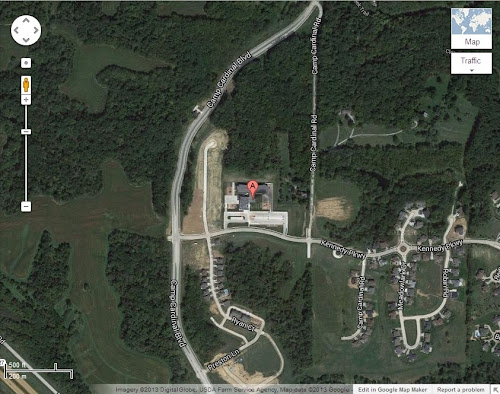 Ninety-two percent of the students at Borlaug take a bus to school. Six buses go there every day. How many teachers would that pay for? But somehow keeping Hoover open is too expensive; fiscal responsibility demands that we tear it down and rebuild its entire capacity elsewhere.
.
Posted by Chris at 3:00 PM

But Chris, all of those houses are where people attending Regina live, remember?

Mandy -- Yeah, ha. If that's the case, Regina must be rolling in the dough. I wonder why they bother with all those buses!