How big will that parking lot be?

Though nobody is saying what will be done with the Hoover School property if the school is closed, we have some pretty strong hints from the facilities planning process. The rationale given was that the closing was necessary to permit the construction of a 300-student addition onto City High. Everyone seems to agree that the addition itself cannot go on the Hoover property, though, because Hoover is so far (and on a different elevation) from the other classroom parts of City. So how does taking Hoover make the addition possible?

We were repeatedly told, by the consultants and by school board member Jeff McGinness, that any plan to keep Hoover open and also build the addition would require the construction of a two-story, 750-stall parking ramp. Yet, in the scenarios that close Hoover, the ramp disappears. Once City takes Hoover, apparently, there is room for a surface lot instead of a ramp.

Let’s start by imagining the ramp, and let’s give the plan the benefit of the doubt. First, maybe the two-story ramp would go on top of an existing lot, thus adding only about 375 spaces. (There is no existing lot that size, so it seems likely that it would go somewhere else and add far more spaces, but I’m trying to make this a conservative estimate.) Second, maybe the new addition would also displace some existing parking. Here’s a map of City, with the number of spaces in each parking lot marked: 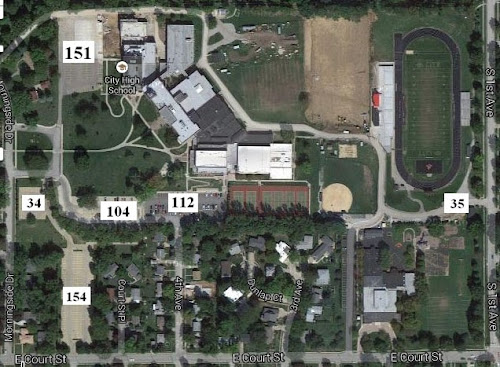 Even if they took the entire northwest lot for the new addition, they would lose only 151 spaces. (Although the Google map is outdated because it doesn’t show the new performing arts addition, I went over to City and counted the spaces myself. I included the approximately 35 unmarked spaces that are used for parking on the east side of the property.)

That means that the plan would add 375 spaces while losing 151, for a net addition of 224 spaces. City starts with about 590 spaces, so the plan would increase that number, at the very least, to a total of 814.

West High, which currently has 1,956 students, has a total of about 750 parking spaces. Yet the plan that brings City up to a capacity of 1,593 somehow requires 814 spaces.

If the two-story ramp is out of the question, then City would have to reach that total some other way – by adding those 375 spaces somewhere else. Without the ramp, we’re told, the only way to do it is by taking Hoover. So let’s imagine what 375 parking spaces on the Hoover land would look like. Here’s what Hoover looks like now: 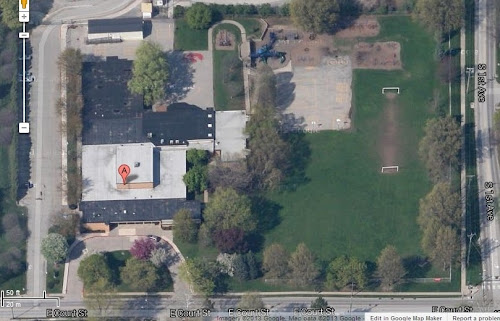 The north parking lot at West High has 372 spaces, so it’s a good comparison. Here’s what that lot looks like, at the same scale: 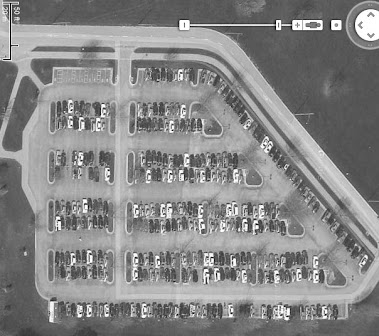 So here’s what the Hoover property looks like with a 372-space lot on top of it: 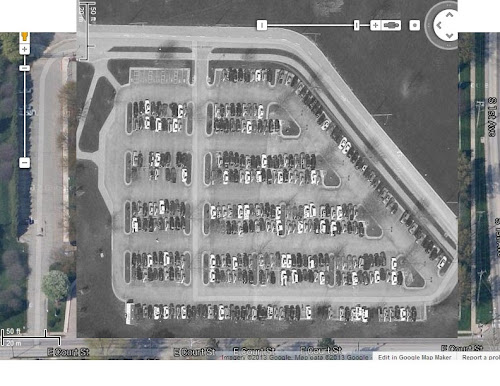 So much for athletic fields.

If there is some other conclusion to draw about how Hoover would be used under the board’s plan, I’d sure like to know what it is.
.
Posted by Chris at 12:33 AM

How much would the parking deck cost?

Anonymous -- The scenario didn't itemize the different costs. McGinness was tossing around a figure at the listening post, but I don't remember what it was. But, even with the ramp, Scenario 1c had lower first costs, lower operational costs, and lower life cycle costs than the scenario that the board finally adopted.

I should add, I'm not advocating for the ramp. I think it was included just to sink the scenario, and that there are ways to build the addition (if it is necessary) without closing Hoover or building a parking ramp.